Teaching in Texas: Along the Border

The Texas-Mexico Border spans 1,254 miles and mostly follows the winding flow of the Rio Grande through a varied, often rugged, landscape populated by hills, mountains, open plains, and desert. Communities large and small line both sides of the border, often clustered near one of the 28 international bridges and border crossings that join Texas with one of four Mexican states.

Home to nearly 200,000 people, Brownsville is one of the largest cities in the Rio Grande Valley and one of the fastest growing areas in the country. It also regularly ranks among the poorest areas in the country, with about 36 percent of the residents in the Brownsville-Harlingen area living below the federal poverty level. Brownsville ISD (BISD) is one of the largest employers and economic drivers for the city. It serves close to 50,000 students. According to its website, 99 percent of BISD students are Hispanic, 96 percent are economically disadvantaged, 67 percent are considered at risk, and 33 percent have limited English proficiency. 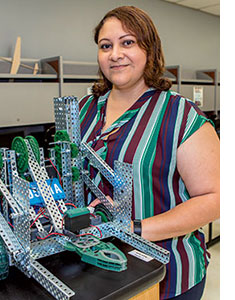 Claudia Cortez is a technology engineering teacher at Porter Early College High School in Brownsville, located just minutes from the Gateway International Bridge and Texas-Mexico border. Smatterings of Spanish and English abound in the classroom as she converses with a student who is asking about a 3-D modeling computer program that she’s using to complete an assignment.

Cortez has been teaching for 10 years, focusing on engineering and career and technology education. Born and raised in Brownsville, she studied education at the nearby University of Texas-Rio Grande Valley (UTRGV) and engineering at Grantham University.

“I was a BISD student, and I’m a graduate of the high school where I teach,” says Cortez.  She is aware of the importance of education in her community and the unique challenges that her students face, particularly the large percentage of whom are first-generation students or English language learners (ELLs).

“In ELL-heavy classrooms, you have to use plenty of visuals to convey the concepts,” Cortez says. “We do many projects that require group work in engineering. Most ELL students team up with students who are already fluent in English but bilingual.  If the student is still confused, I try to explain the lesson in Spanish so they feel comfortable.”

Cortez understands that many students struggle with food insecurity, wake up extra early to catch a bus to school, or take care of younger siblings while their parents work—and she doesn't mind going the extra mile to help them succeed.

“BISD students have access to many resources at school, but many go home and struggle, or they have needs that perhaps are not being met in the home environment,” Cortez says. “But these kids truly appreciate everything you do for them, especially that you’re here; you listen.” 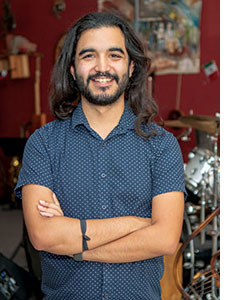 José Israel García is an assistant choir director at Stell Middle School in his second year of teaching. He grew up in Brownsville, received his teaching degree from UTRGV, and student taught in BISD schools.

“People flock to BISD because of the high level of musical talent in the area,” García, a passionate vocalist and opera fan, says. “You might not expect that from a border town, but standards are much higher in this district.”

García tries to make sure his students are able to appreciate the unique opportunity that their heritage and culture can provide them. “There’s so much music embedded in our culture, and there’s so much dance,” says García.

While a university student, García and his colleagues paired an opera adaptation of Hansel and Gretel with the annual Día de los Muertos celebrations that happen in November. They used traditional Día de los Muertos iconography and styles—sugar skulls, bright colors, Mexican folk dancing, traditional Mexican garb, and Mexican folklore like La Lechuza, a witch that in folklore resembles a large owl—in place of the more traditional, German-influenced imagery typically associated with the story.

“Seeing the elementary students get excited about things they’ve known their entire lives being represented on a stage was really powerful for them and us,” García says. “Now that I’m a teacher, those same students said they remembered me all those years later.”

García wants people to understand that the students living in this area want to learn. And the community wants to educate them. But he also acknowledges that these students face challenges that might sometimes seem insurmountable to students elsewhere.

“I have a lot of students who cross the border every day. A majority of my kids are from the downtown area or living in Mexico. A typical day for some of my students would be waking up at 3 in the morning to cross the bridge to get to school on time,” he says. “The majority of these kids are forced to grow up in ways that you typically would not see portrayed on the big screen because that’s not something that happens to typical American kids.”

Even with these obstacles, García says his students continually surprise him with their natural aptitude for music and their desire to learn. “There’s a huge treasure trove of untapped talent, untapped intellect,” he says. “There is so much great stuff here and more potential to be greater, if we are only given the tools.”

Harlingen
Roughly 20 minutes up the road from Brownsville is Harlingen. Although not immediately on the Texas-Mexico border, Harlingen Consolidated ISD (HCISD) has an open enrollment policy and serves many students whose lives intersect daily with the border. 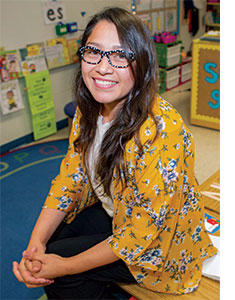 Noelia Garcia teaches second grade at Crockett Elementary School. She is a first-generation student—the first in her family to attend a school in the United States. Many of her students are also the first in their family to attend a US school. She shares with her students deep, familial ties to both the United States and Mexico, and the understanding of growing up in a multicultural environment. Many of her students are ELLs. Every year, roughly half of her class ends up enrolled in the school’s bilingual program.

“Many of my students are first-generation, just like me,” García says. “Although most of my students speak English fairly well, their parents are, for the most part, Spanish speakers only. I know what that’s like because it was like that for me, too. Many of my students tell me stories of crossing the border to Mexico and visiting their grandparents on weekends or during the summer, and I understand how that affects you.”

García, who grew up speaking Spanish and had to adjust quickly to learning English in middle school, understands the importance of gaining fluency in the language as early as possible. She is a certified bilingual teacher and does everything she can to ensure her students grasp English.

“With an increasing ELL population, it is imperative that we have qualified, bilingually certified teachers,” she says. “We want our students to become competent in listening, speaking, reading, and writing in English. As a teacher, I have to help them develop English oral and academic language. I train every year to better serve my students, I have to have a classroom that lends itself to learning, and I have to have intervention plans unique to each student.”

Despite the struggles her students face, García believes in their potential. “I think more and more people are starting to notice the Rio Grande Valley, especially HCISD,” she says. “There are just too many wonderful opportunities for our students.”

El Paso
El Paso has approximately 680,000 residents, but the region, which includes the populations of its neighboring cities, has one of the largest concentrations of bilingual workers in the Western Hemisphere. Now 135 years old, El Paso ISD is the city’s largest employer. According to its website, it serves nearly 60,000 students in 94 campuses. 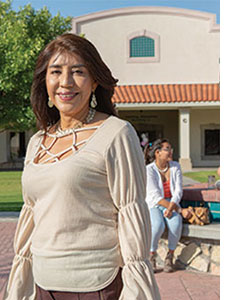 Nellie Ugarte has lived in the El Paso area most of her life and has worked in the area throughout her 31 years in education. She works for El Paso ISD as a professional development consultant for the Region 19 Education Service Center and moonlights as an English instructor at El Paso Community College.

Born in Ciudad Juárez, Ugarte started her education in Mexico but transferred to school in El Paso at a young age when her mother gained US citizenship. As a first-generation student in the United States, it took her a full year to adjust to speaking, writing, and reading English. This story, she says, is common among many students in El Paso ISD, which she says has an 86 percent bilingual student population and a large first-generation student population.

“El Paso is a good combination of cultures and is more multicultural than ever before,” Ugarte says. “That’s one important aspect of our community—the exposure to hearing similar voices but learning from experiences different from our own.”

“It’s not challenging to teach my students,” Ugarte says. “They want to advance and go to college. I believe more than 80 percent of our students go on to El Paso Community College or the University of Texas at El Paso. Our kids are ready to learn, but they need the tools. Many of them probably work harder than kids who aren’t first-generation because they want to go on. The parents want those opportunities for their children, and the kids want them, too.” 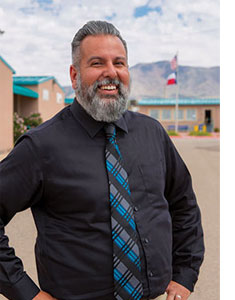 Adrian Estorga, a teacher at Northwest Early College High School in Canutillo ISD, shares Ugarte’s passion for El Paso. He left El Paso for a year to attend the University of Texas at San Antonio but ended up missing El Paso desperately.

“El Pasoans are fish that swim in and out of different countries without regard to where we are, because in the end, for us, it’s all just water,” Estorga says.

Growing up in El Paso, Estorga often felt split between two cultures, two worlds. He sometimes sees this struggle in his students. “When I see what they are trying to get through, I imagine what I would have wanted to hear back then,” Estorga says. “That’s what I work the hardest on, and why I am involved in so many student organizations. I want our students to feel like they belong here and are needed here.”

Estorga believes that combatting assumptions is one of the biggest challenges border communities face. “Assumptions are made about our students and, by extension, our teaching practices,” he says. “We have a high percentage of students with English as a second language. Because there have been so many of these students [in this district] and for so long, our educators are the best anywhere at incorporating strategies to make sure those students succeed.”

“Like many things,” Estorga continues, “border communities cannot be described with one definition. It is a complex mechanism that from the outside can seem simple and quaint, but it is truly a sophisticated machine of many working parts with the community trying to grow and be prosperous on the pass between the mountains.”

Back to Magazine Contents